As you must know if you've visited this blog before, the above is the somewhat baleful-sounding title of my new e-book, available from today on amazon.com.  Its sinister implication is, I think, justified, because its subject is the bloody struggle between Old West lawman Wyatt Earp and his formidable brothers against a dangerous cartel of rustlers and outlaws in and around the silver-mining camp of Tombstone in the Arizona Territory of the 1880's.  Yes, I know, Hollywood and the various outlets of the popular media have already given us multiple versions of this tale, very few of which have been worth the reading or viewing.  Usually the story is cast as a simplistic conflict pitting stalwart agents of law and order against evil cowboys, but I have always been fascinated by the human dimension--call it the tragedy, if you will--of that struggle.  These were, after all, real people, engaged in a grim contest for survival in an unforgiving frontier environment.  On both sides they were not only swaggering, gun-toting males but also innocent wives, sweethearts, children and step-children; and I prefer to think of them all not as familiar Western stereotypes but as frail, flawed human beings thrown into opposition by forces beyond their control and often beyond their understanding.  If I had not seen the story this way, I don't think it would have been worth my while--or the readers'--to revisit it.  I hope you will agree with me.  Whether you do or not, I would appreciate hearing from you.

The cover of the e-book was designed by my friend Britt Kaufmann, who has created the covers of all my e-books.  It appears below, for the second time.  I repeat it because I think she has done such a masterful job.  You would be well advised to check out her own website at www.brittkaufmann.com; she is amazingly talented in several artistic media, not least as a poet and playwright.  I'm also deeply grateful to my dear wife Ruth for navigating the maze of electronic publishing to get this book online, a task I could never have performed myself, Luddite that I am. 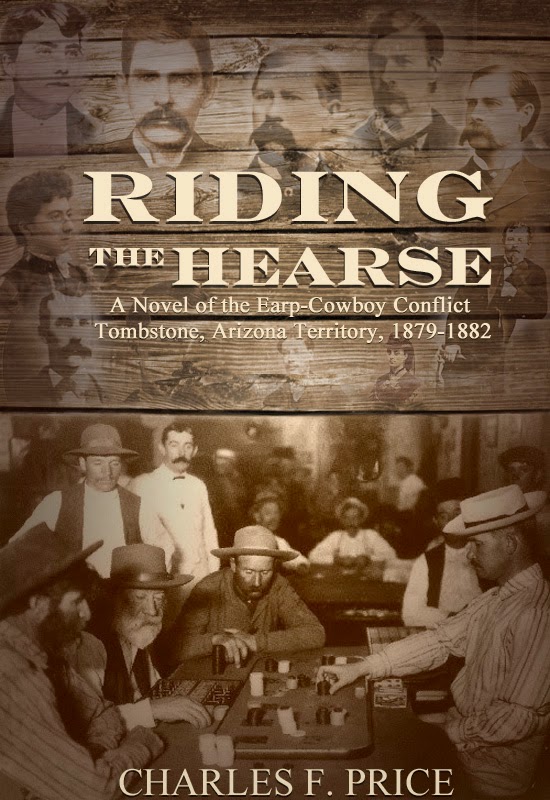 Posted by charlesfprice.blogspot.com at 6:52 AM